German Shepherd dogs dying in misery due to intensive breeding 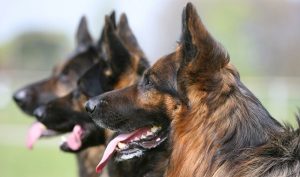 German Shepherds are living and dying in misery due to intensive breeding for “cosmetic” reasons, a major new report by the Royal Veterinary College has found.

A survey of data collected from 430 clinics across the UK reveals arthritis, cancer, aggression and sloping backs are afflicting the breed at higher rates than others due to aggressive selection.

Nearly one in two German Shepherds is being put down because they are unable to walk, experts said.

They said the trend would only cease when pet owners stop buying unnaturally shaped dogs.

The report follows an outcry at Crufts last year after a German Shepherd with an abnormally sloped back and painful looking gait won a “best in breed” prize.

It found that nearly 20 per cent of German Shepherd deaths reviewed were due to musculoskeletal disorders or osteoarthritis, while another five per cent were due to overweight and obesity,

Another 4.7 per cent of deaths were attributed to being put down due to aggression.

Dr Dan O’Neill, who led the research, which is published in Canine Genetics and Epidemiology, said a sloped back with shorter rear legs had become a fashionable look for show dogs, and that this was influencing breeding more widely.

“It’s just a belief that this is what a perfect German Shepherd looks like,” he said.

“The decision to stop breeding them like this is not just one that can be taken by breeders or the Kennel Club, but by the general public.

“If they refuse to buy these dogs then the breeders will stop breeding them.”

German Shepherds were originally bred as a medium-sized dog for herding work until their popularity as a guard dog led to them being bred for a larger size and aggressive demeanour.

“If people think something like a sloped back is good then they will think that more of it is better,” said Dr O’Neill.

The Kennel Club ruled this year that dogs can only be exhibited at Crufts if they are able to “stand freely” and balance while both pasterns – the lower part of the leg – are vertical.

A spokesman welcomed today’s report, saying the German Shepherd was one of the organisation’s seventeen breeds involved in the Breed Health and Conservation Plan.

Categorised in: Breeding, News, Our Blog