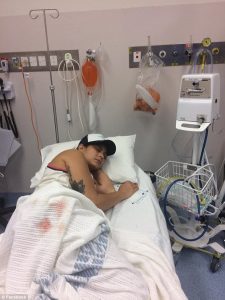 Maya Kidan, 29, (pictured) was getting some exercise and fresh air on New Brighton Beach, just north of Brunswick Heads, when a German shepherd attacked her on Friday

Owner of ‘crazed’ German Shepherd tells a backpacker, 29, ‘she’ll be alright’ after the dog attacked her and left her bleeding as she jogged along a beach.

Police are currently searching for owners of a ‘crazed’ dog that attacked an American tourist while she was running on a popular beach.

Maya Kidan, 29, was getting some exercise and fresh air on New Brighton Beach, just north of Brunswick Heads, when a German shepherd attacked her on Friday.

The attack left her with several open wounds on her thigh and significant bruising which were treated in Byron Bay Hospital.

According to the Daily Telegraph Ms Kidan was ‘screaming’ after the attack and asking the owners if the dogs were ‘healthy and vaccinated’, to which the reply was ‘you’ll be fine.’

The owners then disappeared into the surrounding bush.

Her friend Yonit Plotnik uploaded pictures of the incident to Byron Bay’s Community Board on Facebook and explained that the dog’s owners ‘literally left her there bleeding by herself.’

« Michigan Man Gets Year In Jail For Kicking, Beating German Shepherd
Your Puppy Will Thank you for Reading (and Following) This »