Home › Our Blog › Out for a Walk: Teaching Your Puppy Not to Pull on the Leash

Out for a Walk: Teaching Your Puppy Not to Pull on the Leash 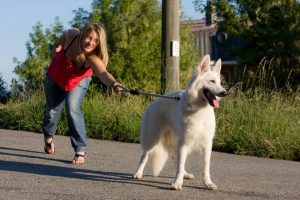 There are many things that tempt your dog when you’re out for a walk, like new smells and other animals. Your dog will try to get where he wants to go, even if that means pulling you along with him! If he pulls on the leash and you allow him to, you’ve reinforced him for pulling, and your pup got what he wanted. Once you’ve allowed him to do this, he’ll do it again. AKC’s, Mary Burch, Ph.D., offers the following 2 techniques:

Categorised in: Our Blog, Training

« How to be a successful dog owner?
Why Won’t My Dog Come When I Call Him? »