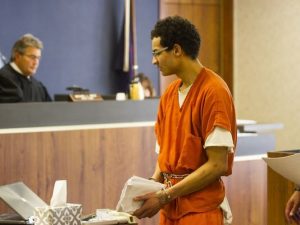 Brandon Nickson, of Detroit, is led out the St. Clair County Courthouse Sept. 25. Nickson was sentenced to one year in jail for animal torture charges.
(Photo: Brian M. Wells/Times Herald)

A Detroit man was sentenced to a year in St. Clair County jail on Monday afternoon following the death of a dog five months prior.

Brandon Nickson, who was living in Casco Township at the time, was originally charged with one count of animal killing-torturing and two counts of resisting and obstructing police.

He pleaded guilty to attempted animal killing-torture in a plea deal, dropping the original felonies.

Officials were called to the 5000 block of Bud Lane April 4 after neighbors reported Nickson had beaten and tortured a 4-year-old German shepherd mix.

A local veterinarian, Joseph Roehl, performed a necropsy on the dog, named Bella, and determined it died of internal bleeding caused by multiple ruptures of its liver. Small burns on the dog’s neck hinted at the use of a taser or stun gun. And there was extensive bruising on the dog’s chest area.

Prior to the sentencing, Nickson — dressed in jail orange and shackles — addressed Judge Michael West and said he took full responsibility of his actions. Nickson said he learned that he can’t act on impulse and needs to think about his actions before he makes a poor choice.

St. Clair County Senior Assistant Prosecutor Jennifer Deegan said after discussing the injuries with the veterinarian she learned the severity of the dog’s injuries would have led to the dog bleeding out in seconds.

Deegan said she felt the one-year sentence was appropriate.

Nickson’s lawyer, David Heyboer, said while Nickson may not be the greatest at raising dogs, he doesn’t believe his client purposefully set out to kill the animal.

Heyboer said the dog grabbed hold of Nickson’s hand with his teeth and Nickson tried to get the dog off of him. Heyboer said his client did kick the dog in the ribs, but he debated the legitimacy of the claim that Nickson used a taser on Bella.

Deegan said according to the veterinarian it was undebatable that a taser was used as there were clear singe marks consistent with that of a taser.

Deegan also mentioned that Nickson had a prior assaultive offense that the Macomb County courts dealt with between 2012 and 2014.

West said while certain facts of the case were up for debate, it was very clear that the dog died as a result of force that Nickson used against the dog.

West said Bella was not just a dog, but a member of the family. West said at times dogs take on the status of a human family member, thus making cases like this very emotional for all involved. If Logan’s Law, which calls for an animal abuser registry to be created, was put into place already, West said he believed Nickson would be a prime candidate for the registry.